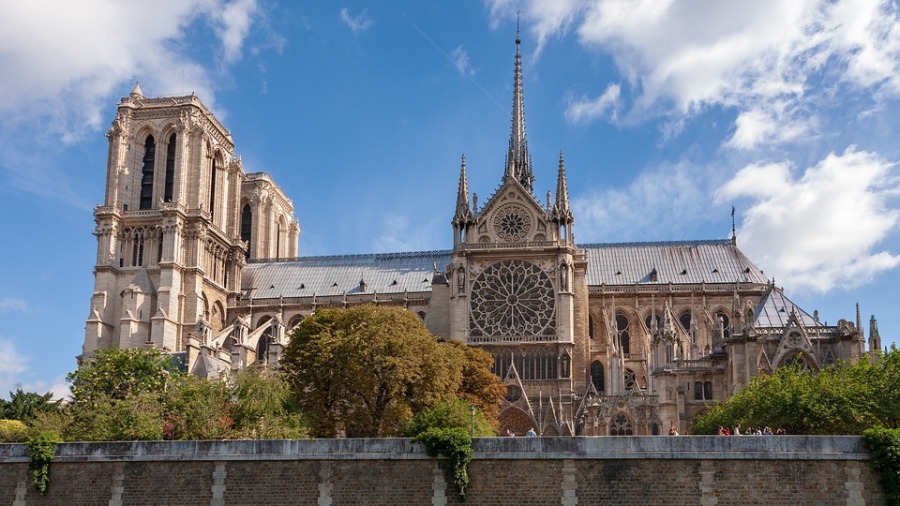 Monday was an odd day. I sat, like many people, shocked by the images of the burning Notre Dame Cathedral. It was a peculiar combination of captivation and horror and a curious unknown source of heartbreak. I have never been to Paris, I have never seen Notre Dame, I am not Catholic or anything close, and yet as I watched the building burn I couldn’t help but feel a sense of loss.

Some of that feeling was undoubtedly found in the reality that moments of crisis or catastrophe have a way of letting us not focus on our usual denominational distinctions; there was also an element of my personal love for history and knowing that I would never get to stand in arguably the most important historical building in the European continent.

But I think for me personally the greatest source of loss was found in knowing that Notre Dame had a way of invoking awe that routinely turned people to think of God and that was turning to ash before my eyes. I have had that architecturally induced awe before in several places but the most notable was in Saint Patrick’s Cathedral in New York City.

I happened to be in New York on Saint Patrick’s Day and had the mysterious juxtaposition of watching people stagger around the streets fall down drunk at 9 am and immediately cross the threshold of the cathedral and, even through excessive inebriation, become reverently silent. It was quite the moment.

Wandering down 5th avenue in Midtown Manhattan on a day that the city deserved to go the way of Sodom and Gomorrah and the cathedral still had a way of inducing amazement that bordered on brief moments of devotion.

To watch that type of an awe inducing building burn to the ground was heartbreaking. But, regardless of the motivation of my sense of loss I think the more pertinent question is how I, or anyone else in this instance, should respond to that particular loss and to answer that we turn to pages of history.

This is not the first time a particularly iconic religious building has been lost. As Rome was in a state of repeated invasion during the 5th century the center of the empire moved east to Constantinople—which is now Istanbul and you’re welcome for reminding you of the existence of that song. The Eastern Roman Empire, now known as the Byzantine Empire, considered itself Roman and the Emperor Justinian decided he is going to build the greatest building ever built.

He drained the royal treasury to build Hagia Sophia (Church of Holy Wisdom) and as he satisfyingly stood back to look at the church he humbly uttered, “Solomon, I have outdone thee.”

Hagia Sophia is every bit as iconic in the East as any, and possibly every, gothic cathedral in the West. It is the church building that all others strive to emulate, it is credited with the conversion of Vladimir the Great—and subsequently many Slavic territories and people—and, miraculously, still stands to this day close to 1500 years after its completion.

This brief history lesson begs a question: How can Hagia Sophia be lost like Notre Dame if it still stands? As Islam grew in the 8th century onward the Muslims were adamant that Allah cannot be the true God if the greatest building in the world is Christian. It took hundreds of years but in 1453 the Ottoman Turks conquered Constantinople and took control of Hagia Sophia.

For an Eastern Orthodox Christian, this would have been—and for some probably still is—every bit as devastating as Notre Dame burning. Crosses were replaced with crescent moons, beautiful mosaic artwork was plastered over with Arabic lettering, and any vestige of Hagia Sophia’s Christian intention and use for a thousand years was erased as thoroughly as possible.

Even recounting the story evokes in me a sense of injustice. There is a great loss in the burning of Notre Dame and the history that happened there and that feeling of loss this week echoes the loss from when Constantinople/Hagia Sophia fell (just in terms of historic doctrinal moments in the church, three out of seven ecumenical councils took place in Constantinople).

How does all of this help me to respond to that feelings of loss?

Today is Good Friday, the annual reminder that the all-powerful God chose to make the clearest manifestation of his self-revelation on a cross. He is the God who is not known in grandeur but as the suffering savior.

Allah did not become the true God because Hagia Sophia was conquered. When God came in fullness he was not interested in claiming grand buildings or amassing territory.

The beautiful mosaics that have tragically been covered at Hagia Sophia and the beautiful architecture that tragically burned at Notre Dame pale in comparison to the beautiful tragedy that is the life and death of Christ. At one time those buildings properly inspired awe and now they remind us that the beauty of the two church buildings has been veiled in the same way that the Almighty God’s immense glory was scaled down to infancy to come as a weak child.

The kingdom of God is not shaken when buttresses burn, in fact, in some odd ways, the deterioration of one of Christianity’s grandest accomplishments serves as a painful reminder of the humility of Christ. This does not mean it is wrong to spend great sums of money to build beautiful buildings or make beautiful art to worship God—just a quick perusing of the amount of gold overlay in the temple or the story of Mary bathing Christ’s feet in perfume that cost a year’s wages should put that notion to rest—but God’s glory is not diminished when a grand building loses is splendor.

So, how do we respond? We turn to the foot of the cross. We see in Christ a far greater loss than when a building burned or was conquered, we are reminded of God’s great redemption that was bought through that loss, and then on Easter Sunday we rejoice knowing that the most important temple to ever grace the earth’s surface was rebuilt and one day will come again in glory that will make every cathedral throw down her walls because she cannot stand next to the greatness of Christ.